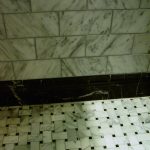 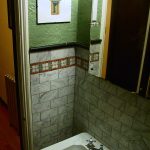 Frederick William Anhalt was a developer and contractor in Seattle that worked in the period surrounding the Great Depression.  Although not trained as an architect, he designed and built rather large luxury apartments in a variety of revival styles especially espousing the Tudor style.  These same apartments are recognisable as gracing some of the oldest neighborhoods in Seattle, primarily on Capital Hill and Queen Ann.

Norberry Tile was approached by a property owner of one of Anhalt’s Capital Hill Apartments to redo a bathroom in the period style.  The project was a fun challenge in that we had only two weeks to deliver the material as it needed to fit the installers schedule before the holidays and it needed to fit the closet sized bathroom so commonly constructed during the period.  In early homes bathrooms and kitchens got very little respect!  Partially driven by what could be acquired quickly we settled with combining stylized patterning and color from the Art Deco era with the classical elements of marble and mosaic that the Tudor Style reflected.  The reflective white marble helped make the closet/bathroom appear just a little bit bigger.  The completed bathroom was more beautiful than what Anhalt installed, but fit his insistence for beautiful materials, and to the unknowing eye, it certainly looked original.

Norberry Tile was awarded Bronze for this project as the Northwest Bath of the Year award with Home Magazine in 2000.

Sorry, the comment form is closed at this time.